Last week, 48K And Some Change Moms (er, sorry, meant 1,000,000 Moms) decided the very public beatdown they received at the hands of JC Penny, Ellen DeGeneres, and scores of people who don’t give a shit about what consenting adults do in the privacy of their own homes, wasn’t enough. They have now decided to attack DC Comics and Marvel Comics re: their recent announcements regarding gay characters within their respective universes. DC announced they were going to have a longtime character outed and despite my personal opinion, it appears Earth 2’s Green Lantern is their man. On the Marvel side, Northstar, the first mainstream character to come out of the closet (as a member of Alpha Flight in ’92, now a member of the X-Men), is marrying Kyle, his longtime partner.

Hilarity could quite possibly ensue.

If the “Christians” who form 1,000,000 Moms (in quotes because the last time I checked, Christians were about love and acceptance and following the example set by one J. Christ, not judgement, hatred, and intolerance), thought Ellen’s fans were slavishly devoted, wait until they start running into comic book fans. If you step between a geek and his/her object of affection, you’re in a world of fucked, ladies (I keep wanting to steal Loki’s line to Black Widow during her interrogation of him during The Avengers, but I’m trying to be the better person and play nice). Gays are the object of scorn, ridicule, and derision. Guess who else fills that description? 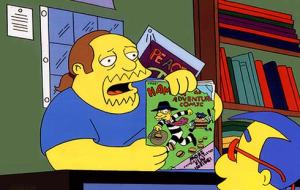 We geeks know from being put down and patronized based on what we love. Scouting the message boards and Facebook pages and blogs, I’ve already seen several, if not most, of those sites are either supporting Marvel’s and DC’s decisions or just apathetic because the storylines don’t affect the titles they themselves read. If you’ll look at the Facebook pages of Marvel and DC, you’ll see a lot of talk about this topic, mostly from those who are adamantly opposed to those doggone gays with their kissing of other dudes and being all fabulous and whatnot. But if you look really close, you don’t see a lot of the anti-gay people actually talking about specifics of the two storylines; they’re making general statements such as “If you go through with this, I’ll never read another one of your comics again” or “If you go through with this, I’ll boycott Warner Bros. (owner of Marvel)/Disney (owner of DC)” or “How can you put out this smut in a publication read by children?”

Keep that last one in mind, I’ll get to it in a minute.

What this leads me to believe is that various groups such as the 1M Moms, the American Family Association, The Organization of Christians Determined to Get Rid of Gays Because They Make Us Uncomfortable and We’re Jealous of Their Stable Relationships While Our Own Marriages Were Built on Sandy Foundations (OK, I made that last one up. But can you imagine?) sent out desperate e-mails to their membership base telling them to descend upon any and all comic-based Facebook pages, blogs, message boards, et. al., and voice their outrage.

I would like to explain to these individuals why their promises of boycotts and whatnot aren’t going to work. Alright, if you’re an extreme right-wing homophobe who believes in smaller government except in the case of it’s none of your goddamned business, listen up. Remember the Ellen deal? The one with JC Penny? Remember how they were threatened with a boycott if they let that terrible, awful LEZ-BEE-IN Ellen continue to represent them? ‘Member that? How’d that work out? Not so good, huh? Well, JC Penny is normally the kind of company that would crumble immediately given that kind of public pressure and the threat of negative publicity. Normally, a company such as that would pay Ellen off, give some horseshit reason why they changed their minds, and the “good Christians” could sleep easy in their bed of righteousness, knowing they kept another one of them queers from, I don’t know, making their kids want to wear dresses, cook desserts, and come up with a divine paint scheme for the dining room.

Well that didn’t fucking happen, did it?

So on the wrong end of a pretty good ass-whippin’, you’re going to attack the entertainment industry? You know, the industry that has a LOT of homosexuals within it? Do you honestly think for a nanosecond that Disney and/or Warner Bros. is going to give two shits what some backward-ass, small-minded tit such as yourself thinks about their product? A product you don’t even fucking buy to begin with?

Now let’s go back to that comment I made earlier about the children who read comics. These aren’t your father’s or grandfather’s comics, folks. Take a good look at the graphic at the very top of this article. The idea of having your child exposed to mind-numbing violence or the complete sexual objectification of women is totes acceptable in your book, but the very idea of two men shown kissing or living happily in a committed relationship is what sends you over the edge? What the fuck is wrong with you? How is one OK and the other isn’t?

Here’s the down-and-dirty fact behind all of this: it’s not that the characters are gay, it’s that the characters are gay men. Where was the outcry over Batwoman or any of the other lesbian comic book characters? Where was the outrage 20 fucking years ago when Northstar originally came out? It didn’t exist because Northstar came out around the same time DC killed Superman and Northstar was pretty much gay in name only. And as far as the gay women go, they’re still created in a manner that provides titillation for men. I mean, c’mon; hot broads dressed in skin-tight spandex making out? Guys literally pay to see that shit online. But the idea of two men (MEN, dammit) kissing or acting in any manner that is believed to be anything other than masculine is an absolute anathema to these people.

The best part of all this is the absolute hypocrisy employed by those who are against gay marriage in general. I posted a pic here the other day that was awesome in its hilarity. The same passage of the Bible that says two men together are gross and not cool is also the same one that says no tattoos. Oh, but there’s more. Leviticus also says women can’t leave the house without their heads covered or that a woman who loses her virginity prior to marriage is fucked, both literally and figuratively, in the eyes of the Almighty. So how many of those 1,000,000 Moms were pure as the driven snow when they said “I do”? How many of them are dressed in accordance with the Bible when they leave the house every day? How many of these pious, nosy, can’t-keep-their-noses-out-of-places-that-dont’-fucking-concern-them women have a cute little tattoo somewhere on the temple God is loaning them until they’re called home?

And let me explain something else (I was raised Baptist, kids; I can preach ALL day long, canIgetanamen?), in the eyes of God, a sin is a sin is a sin. What that means is that the sin you’re protesting against doesn’t make the sins you commit OK. For example: the fact you’re against homosexuality doesn’t mean it’s OK to drive 15 miles over the speed limit every day because the Bible states that you must follow the laws of man (Romans 13:1-2). Laying with a man as you would a woman, according to the Old Testament, is wrong, but you know what else is wrong?

Wearing clothes made of more than one fabric.

Shaving or getting a haircut (I personally love this one since the people who gave me shit at church when I was a teen about my long hair had scalp-bearing crewcuts. See you in Hell, assholes).

Growing a variety of crops in your field instead of just one.

If you care to read more, click HERE.  But shit, Kurt, I hear you saying…those things are HARD. Or just out-and-out fucking ridiculous. The stoning queers thing is so much easier. Besides, that’s Old Testament stuff. It’s the NEW Testament that matters.

“If you love Me, you will keep My commandments.” John 14:15 (New Testament). Pretty sure that means ALL of them, not just the ones that are easy. And if you read HERE, there is a case to be made that the New Testament describes same-sex relationships and is pretty OK with it. Finally, and this is the big one, Jesus loved us ALL. Not just the folks who were right all the time and rubbed it in everyone’s face; He loved the sinners, the gamblers, the whores, etc., too. In fact, he gave the latter a little more attention because he felt like they needed it.

So for all of you hate-filled “Christians” who want to attack DC and Marvel or worse, attack the homosexuals in reality who have enough shit to deal with because of people like you, maybe you need to read your Bible, especially the teachings of the Son of God, a little closer. I may be wrong in my support of marriage equality and the acceptance of homosexuals as fellow children of God, but I’d rather err on the side of love rather than be “right” in subscribing to judgement, hatred, and intolerance.

One thought on “Misleading Facebook Page Not Happy With DC, Marvel re: Teh Gays”