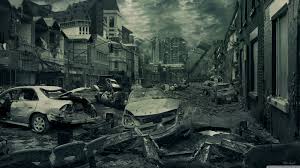 Looking back, it’s hard to figure out why we didn’t suspect the bees in the first place.

The scientists kept telling us they were mysteriously disappearing, that something man-made was killing them off. We were bombarded with data saying if the bees disappeared, it would be an epic catastrophe for mankind. The fact was, the bees weren’t dying.

They were leaving Earth for reinforcements.

It’s been three days since the bees returned, stronger, smarter, and much, much bigger. The Inauguration Day attack in Washington DC was only the beginning, but it put the world on notice they were coming and they were pissed. It didn’t help. Nothing did. Much like post-election America, Earth’s population was distracted by what was happening in Washington that day. While they were watching in horror as nearly the entire incoming and outgoing American government was gruesomely killed by the now walrus-sized insects, the monsters’ brethren were lying in wait around the world.

As the controversial new President was giving his inaugural address—a hodge podge of contradictions, junk science, and out-and-out lies—the sky went black as the bees descended. The man who had been the most powerful man in the free world for less than 15 minutes looked up, cocking his head like a curious German Shepherd, and could faintly be heard saying, “But he swore he wouldn’t—“

He was cut off by three massive monsters plunging their stingers into him repeatedly as their mandibles tore at his flesh. His screams, blessedly short, were other-worldly and will haunt my nightmares for the rest of my life, a life that is forever changed.

The bloody mess that had once been a billionaire fell lifeless on the ground behind the podium as the rest of the bees began their attack in earnest. A couple networks shut down their feeds once they realized what was happening in an effort to spare viewers the horror of seeing a human being ripped apart. The others, including all the cable news networks, kept rolling as the talking heads on duty provided a running commentary of the end of the world.

The bees at first seemed to slaughter indiscriminately, but soon a pattern emerged for those willing and brave enough to look for it. They were killing all the politicians who had, over the course of their careers, done their damnedest to convince their constituents science was a liberal lie to appeal to their right-wing religious voter base.

How did that turn out for you, fellas?

I’m sorry for the levity. At a time like this, it’s hard to find humor in anything so you take it where you can. Because the alternative is to simply think about what has happened since Inauguration Day and let madness take over. The plain and simple fact is, they’re intelligent. And not some form of basic intelligence or even dolphin-level animal kingdom intelligent. They recognized faces. They knew who they were going after. Seeing who they spared made that all the more apparent.

Somehow, the outgoing First Couple made it out, helped mainly due to the Secret Service immediately abandoning their new boss and his family, rushing to their old one. The Vice President’s wife, a former Secretary of State, her husband, and two former Presidents also made it out. One of the Presidents tripped over the plastic he had been using to protect himself from the light rain and fell hard. He quickly got up and rejoined the group, but I could’ve sworn one of the bees saw this and laughed a little.

The now-former Vice President stayed behind and what happened then will be repeated as legend for centuries. Channeling his inner Theodore Roosevelt, the meme-loving, jovial, grandfatherly man the nation came to love, especially in the final years of his time as the No. 2 man in the White House, threw off his coat, tore open his shirt to reveal a massive eagle tattoo and at least one visible scar across his belly. Open-shirted and disheveled, the first Vice President from the state of Delaware grabbed the nearest bee, punched it in the head, and screamed, “Come on, you motherfuckers! Uncle Joe’s got something for ya!”

The assaulted bee moved in towards the raging career politician but two more immediately grabbed their comrade and flew off, as though protecting the man from harm. The former US Senator seemed to realize what was happening and ran off after his family, grabbing the woman who would’ve been First Lady and her young son, taking them with him to safety.

What we didn’t realize until later due to the incredible carnage we were seeing in Washington, this was happening all over the world. The Kremlin had been absolutely decimated. China, North Korea, Venezuela, Colombia, Central America, Syria, Iran, governments everywhere were seeing its leadership brutally slaughtered along with any family or friends near them.

More telling were the countries not affected at all, such as Australia, the entire continent of Africa except Ethiopia and Libya, and all of the Scandinavian countries including Iceland and Greenland. Nations such as Spain, Germany, France, and Italy saw certain members of the government killed, but not the top leadership. England, on the other hand, saw the same brutality the US did with the exception of the Royal Family, who all escaped without harm. Ireland and Scotland were also spared.

It was all coordinated by the bees. Every attack on the planet was carried out at the same time, lasting a total of about 30 minutes. And then, after the attack, they left. Just like that. Just like that, the worst attack against the governments of the world in its history was over. The sounds of terror, fear, and pain echoed throughout the city. The city’s first responders would have been taxed beyond their breaking point had it not been for the hundreds and thousands of people immediately stepping up to help.

The EMTs and volunteers worked their way to the Presidential podium. The majority of the people in the stands behind it were dead, massive holes in their torsos from the bee stings and bodies torn apart by hungry mandibles. They looked for the now-former President and found nothing but a bloody suit, a red tie with Scotch tape on the back, and one shoe. One of the EMTs, a black lesbian who also worked for the Capital Police, smirked as she threw the suit (and the body that remained) in a trash bag.

Out of nowhere, a voice blasted in my head. Based on the reactions of those around me, I realized I wasn’t the only one hearing (thinking?) the chatter.

“THIS IS YOUR ONLY WARNING. GO FORWARD AND BE KIND.”

When the voice stopped, people continued to look around and talk amongst themselves for a minute or two. When they understood that was the entirety of the message, they went back to assisting the wounded and recovering the dead.

Later that day, I joined the remaining Representatives and Senators in an emergency session of Congress. With much of the opposition no longer among us, it didn’t take long to vote the former POTUS back into office using emergency powers. It was made easier by the fact nearly all of the newly-elected President’s cabinet had been murdered along with the President. Only his Secretary of Education remained and she could be heard to say “Fuck that” when told she would be the next President. That wasn’t the case anyway since she had never been officially voted into her roll by Congress.

My fellow Senators and I found the newly-reinstated Vice President, now completely shirtless and drinking a beer—and obviously not his first of the day—in the Oval Office after the session. He looked weary, but his eyes were bright and alert. He had blood on his hands and chest (not his) and more scars were visible now in the artificial light of the room.

He motioned to the large red cooler with “VEEP” written in Sharpie on the white lid. One of my colleagues opened it to find a couple cases of iced-down beer. The owner of the brewery had been a vocal supporter of the man replacing William Henry Harrison as the shortest-tenured POTUS in American history (17 minutes, 32 seconds), but good beer is good beer.

He had his feet on the desk and was leaned back in his boss’s chair, looking up at the ceiling while sipping his beer. As we all took a beer and opened it, the Vice President sat up and said:

“A toast. To those we lost, to those we have regained, and to a minor in melittology. So long and thanks for all the honey.”