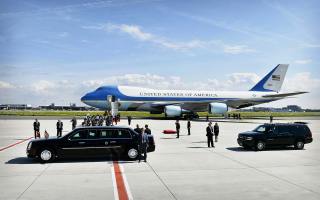 (Photo by Travel + Leisure. NOTE: This is not the pic from today in Houston)

A friend from Texas posted a pic of AF1 at the airport. Yes, it’s impressive. Seriously. That’s a big-ass plane. And it’s a unique experience. Someone commented on that post “If it was Obama, he’d be at golfing.” (His grammar errors, not mine). He said this with no irony whatsoever.

I’m sorry; I’m not taking their opinion seriously anymore. If you want to debate on why Hillary would’ve been bad for this country, I’ll bite. If you even want to say your support of Trump exists because you want to see the Presidency go down in flames so we can start over & rebuild it properly, I’ll absolutely talk to you about that.

But for the people like that, who scream “Fake News” every time a magazine or website that they have no business reading due to all the big words tells them their emperor is a fucking mentally-ill lunatic and is literally–not figuratively–ruining our country, their opinion seriously means nothing.

It means nothing in the way that I am in no way suited to tell a neurosurgeon how to do their job. This Presidency is built on the belief that everyone should be heard. That is not true. I’m not saying you have to be a MENSA member to talk politics. I know a lot of people who may not have a lot of traditional education, but they’re sharp and have an understanding of the world they live in.

But when the majority of the things coming out of your mouth are nothing but the buzzwords taught to you by Brietbart, Drudge, and 45, no, you can just shut the fuck up because nothing you have to say is of any use or importance.