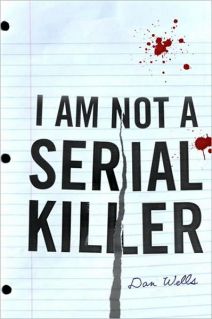 If you combine Encyclopedia Brown and Dexter, you get John Wayne Cleaver, the protagonist(?) of Dan Wells’ debut novel I Am Not a Serial Killer.

This is another in my line of “I know it’s an older book, but if I haven’t read it, it’s new to me” book reviews. I was introduced to Wells this past summer on the Dark Days Tour as he was promoting Partials with fellow authors Veronica Roth, Aprilynne Pike, and SJ Kincaid. The Partials series falls more in the Young Adult genre and the next book in the trilogy, Fragments, is scheduled for release in Februrary of next year.

In addition to being his first novel, Serial Killer is also the first book in a trilogy, followed by Mr. Monster and I Don’t Want to Kill You. John Wayne Cleaver’s tale is, at first glance, typical YA fodder: High school-aged lad placed into a supernatural situation where he has to rely on heretofore unknown abilities to win the day. This is kinda like that.

John Wayne Cleaver was given his name by his deadbeat dad because of said father’s love for The Duke. The problem is, young John is a medically-diagnosed and admitted sociopath who struggles to keep the would-be killer within him at bay, so the name John Wayne takes on a rather unfortunate and much different connotation (I mean John Wayne Gacy, the clown you didn’t want to hire for your kids’ birthday party). His father, his sulking sister, his single mother and her pragmatic sister all figure into why John is the way he is as he helps out at the family mortuary.

Did I mention his mother and aunt run his small town’s funeral home? No? Well, yeah, they do. That’s not an unfortunate piece of the story for a kid who has a knowledge of serial killers Wikipedia writers would be green with envy for.

The story takes off when some very grisly murders begin taking place in John’s backyard. Figuratively. They don’t literally take place in his backyard. I meant in his town. After a couple of the victims show up at the family business, John decides to do some sleuthing and discovers that the killer is not only someone he knows, but someone with a very dark secret. As though being a murderer isn’t dark enough.

Reading a synopsis of Serial Killer would lead you to believe you know how the book is going to play out and you would be wrong; dead wrong (see what I did there?). The brilliance of this book lies in two things: 1) Wells’ research into psychology and sociopathy, and 2) changing the way you look at the protagonist and the antagonist in this story. Cleaver, while admirable in his desire to do the right thing, can be hard to like at times. The killer, while committing some truly grisly murders, has a part of his story that readers will empathize with.

Trying to put this book in the YA category is a back-and-forth fight. On the one hand, it’s textbook Young Adult fare, in that there is the young person trying to take on a foe that is completely out of his league. That’s a staple of YA literature. But on the other hand, every relationship Cleaver has, whether it’s his family, his so-called best friend, and his potential love interest, is effected by his sociopathy, his obsession with serial killers and death, and his battle to keep his darker self from gaining dominance. Wells hasn’t written another Twilight; this is no sparkling vampire or buff werewolf. John is a potentially dangerous young man and should absolutely be viewed as such. He should, however, be seen as a young man with a legitimate disease and an individual who is the target of bullying and ostracism at his school, topics that many, if not most, teens can relate to in today’s society.

As a man nearing 40, I really enjoyed this book. I found it to be a quick read, an entertaining read, and a memorable read. While this book can be extremely violent, I do think young readers (high school-aged readers) would enjoy it as well. I think there are many battles fought by Cleaver that teens can identify with. The metaphoric ones. Not the ones dealing with a mass murder. Call the police, kids; that’s why they’re there.