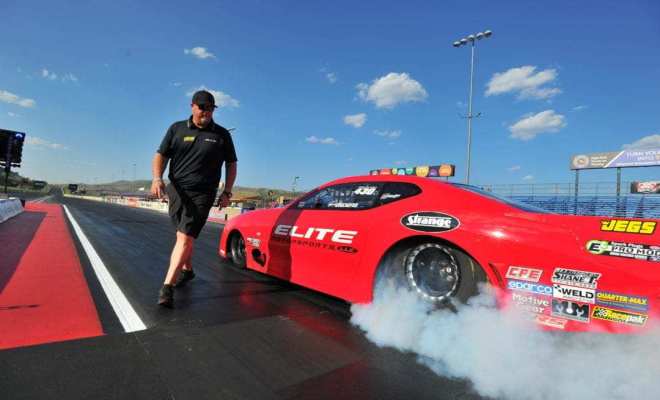 Erica Enders decided last year she was going to race Pro Mod at select races in addition to her duties as a full-time Pro Stock driver for Richard Freeman’s Elite Motorsports. Within that 12 months, she has gone rounds and in Houston two weeks ago, set the Pro Mod speed record with a pass of 260.11 mph. That lap made her the first NHRA driver to officially reach the 260s in that class.

The highlight of the two-time Pro Stock champ’s nascent Pro Mod career was her invitation to Drag Illustrated’s World Series of Pro Mod at Bandimere Speedway near Denver. It was a big enough deal for a woman with 22 Pro Stock Wallys and a Disney movie that she framed the invitation letter.

“It was definitely exciting to be part of that and we’re really looking forward to going back to that this year,” she said on a recent edition of PRN’s Nitro Notes. “And not just for our car, but for Alex Laughlin and Steve Matusek as well, so we should have all three of our guys at Bandimere.”

Enders and the rest of the elite (no pun intended) racers who have participated in WSOPM over its two-year history consider the event more than just a race. With both the staff at Bandimere and Wes Buck’s crew from Drag Illustrated on hand, it’s a race where racers know they’re appreciated.

“It was really nice to just go somewhere and be treated with so much respect and it was so much fun and laid back,” she said. “It was just a cool environment.”

Racers like Enders see the World Series of Pro Mod is more than a race. It’s a show of respect from Drag Illustrated to both the racers and the fans, who want to see the baddest racers on the biggest stage and have an unforgettable time in the process.

“Wes really gets it,” said Enders. “He really understands. He’s a great promoter. He gets that the racer is the customer and he’s awesome at it. The most important thing about it is that he’s so passionate about it. I have to thank him a lot for what he’s done, not just for Pro Mod, but for our sport in general.”